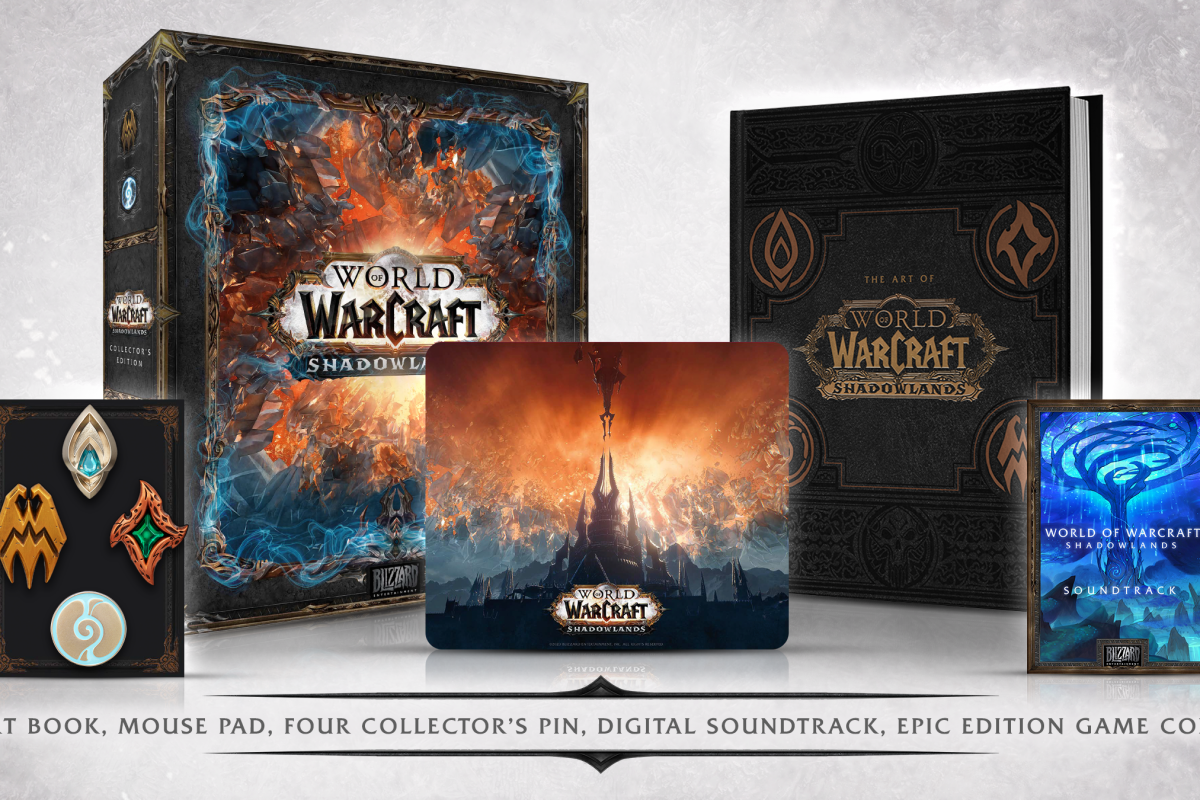 On the Livestream that features a preview of Shadowlands this morning, John Hight the Executive Producer of World of Warcraft announced Collector’s Edition which will be present for future expansion.

Pre-orders will be available online in the next few days and players can check availability at their favorite retail stores. Detailed information about Collector’s Edition, prices, and pre-order locations can be found on this site.

The free five-chapter Trial by Felfire Story Adventure is NOW LIVE with Patch 17.4.1! Follow the story of Aranna Starseeker (Elise Starseeker’s crafty younger sister) as she embarks on a thrilling journey of self-discovery, assembling a motley crew of outcasts and teaming up with Illidan to take on the mad architect of the Rusted Legion itself: MECHA-JARAXXUS! Complete the Trial by Felfire and you’ll earn the Rusted Legion Card Back!

We’re also excited to share that we’ll be rolling out a Battlegrounds balance patch tomorrow (June 18), along with a few bug fixes and a change to Twin Slice which you can read about below.

Golden Twin Slice will be eligible for a full dust refund for two weeks after the 17.4.1 patch goes live.

The Felfire Festival begins with the release of patch 17.4, which welcomes a salty new crew of minions to the Battlegrounds—Pirates! the Trial by Felfire Solo Adventure will unlock, followed by Trial by Felfire Challenges on June 25. Beyond that, we’ve got some special Tavern Brawls and legendary quests lined up to mark the occasion.

At the start of each game of Battlegrounds, five of the six currently available minion types (Beasts, Demons, Dragons, Mechs, Murlocs, and now Pirates) will form the recruitment pool for that game. The active minion types will be displayed while you’re selecting a Hero—you can also check anytime during the Recruit phase by hovering over Bartender Bob’s deck. To keep things fair, Heroes designed with synergies around a specific minion types will sit out if their corresponding minion type is unavailable.

Pirates will always be available in the minion pool until they join the rest of the shifting minion pool in a future update.

Follow the story of Aranna Starseeker (Elise Starseeker’s crafty younger sister) as she embarks on a thrilling journey of self-discovery, assembling a motley crew of outcasts and teaming up with Illidan to take on the mad architect of the Rusted Legion itself: MECHA-JARAXXUS! All five chapters of this Solo Adventure will be available for free on 18 June. Complete the Trial by Felfire and you’ll also earn the Rusted Legion Card Back!

Before the adventure unlocks, Aranna Starseeker will enter Battlegrounds on June 16 as an early-access Hero for players with Battlegrounds Perks to try out before she formally joins the fray on June 30!

Finally, Trial by Felfire Challenges will unlock on June 24, where players will create a deck and battle Outland’s baddest bosses!

Face off against the likes of Doom Lord Kazzak, Supremus, and Mother Shahraz in a gauntlet of iconic raid bosses from the Burning Crusade! Complete all challenges to earn Golden Kael’thas Sunstrider!

Starting on 18 June there will be a new Legendary quest unlocking weekly with pack rewards!

For more information about The Felfire Festival begins with the release of patch 17.4 you can check this site!

Nice to meet again, travelers! The hardest four weeks at Hearthstone are in sight, but with the element of felfire. Starting June 10, the Felfire Festival will present the biggest excitement in Outland, from events, prizes, large Battlegrounds updates, as well as free Solo Adventure Felfire containing five chapters.

Felfire Festival opens with the presence of Pirates to Battlegrounds! Meet 17 minions and 4 new heroes in this big update, including the return of Patches with the exciting new Hero Power.

Live the story of Aranna Starseeker in Solo Adventure FREE containing five chapters on her journey to find identity, gather a crew of outcasts, and join Illidan and Demon Hunters to face Mecha-Jaraxxus, the crazy architect of the Rusted Legion!

Aranna will also enter Battlegrounds on June 18 as an early-access Hero for players who buy Battlegrounds Perks before officially joining on July 2.

Arrange decks and face the biggest and hottest raid bosses in Outland!

Burndown Tavern Brawl is back! Take a random deck, and whoever loses in each brawl will take his opponent’s deck for the next brawl. Which deck will sit on top of the victory?

End the Felfire Festival event with Rumbledome Tavern Brawl! Choose an Outlander from Trial by Felfire, pick up weapons, and kill all enemies to get a slot in Rusted Legion to fight Mecha-Jaraxxus.

Everyone who comes to the festival will get rewards!

For more information, you can directly go to patch notes

See you at the Hearthstone Felfire Festival! 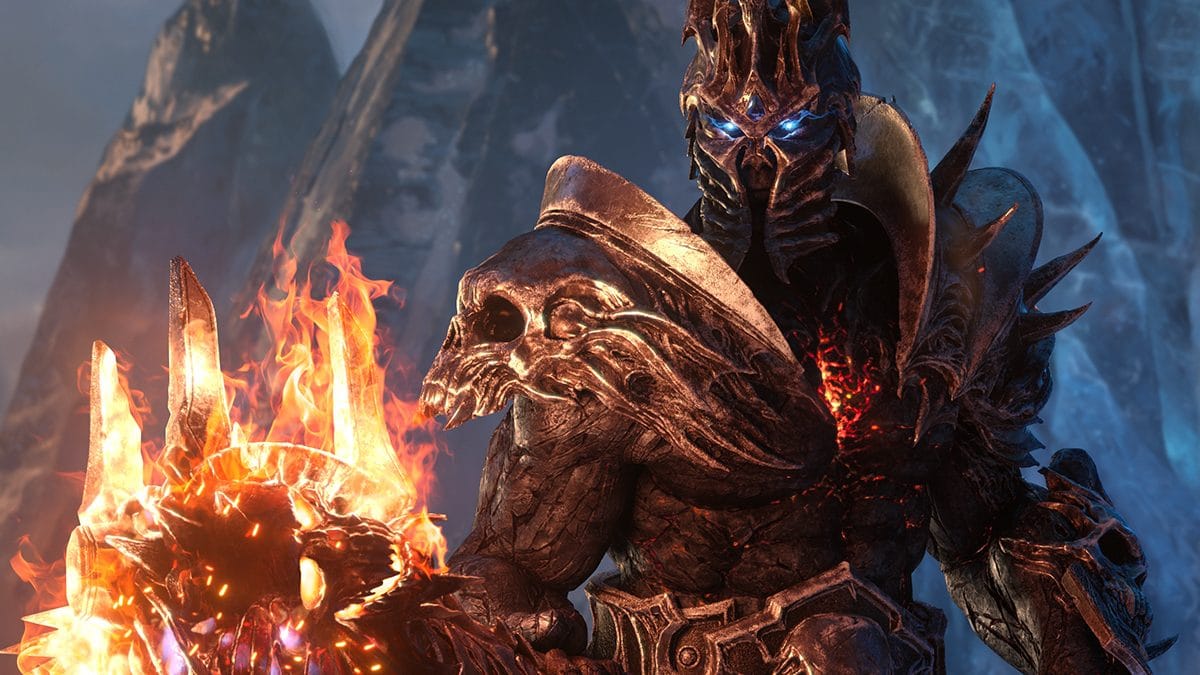 Those who have lived a life of services are drawn to Bastion to assume the highest duty of all – carrying souls to the Shadowlands. Amongst Bastion’s gleaming spires and sweeping vistas await challenges to test the mettle of the steadfast kyrians.

A Vibrant afterlife for those closely connected to the wild, Ardenwald is a domain of endless restoration tended by the mystic night fae. Within this internal forest, massive dream trees draw in precious anima – soul essence – to feed the spirits of nature awaiting rebirth.

Within war-torn Maldraxxus, might-of all kinds-makes right. Here, in the birthplace of necromatic magic, those who maser the powers of death turn legions of ambitious souls into relentless undead armies.

A realm of looming keeps and gothic villages, Revendreth is home to venthyr, the harvesters of sin. The wretched souls who arrive here may find penance for their misdeeds…or merely indulge the appetites of their keepers.

To be cast into the Maw is to be doomed to a bleak eternity. It is a tumultuous, hopeless land where the vilest souls in the cosmos are imprisoned forever. Should be ancient evil chained here break free, all of reality will be consumed

Oribos is the arrival point for all souls who enter the Shadowlands. At this crossroads, the dead are judged by the impassive Arbiter before being sent to their final destinations, and Oribos’ denizens swap gossip and anima—soulstuff that serves as both power and currency.

Align yourself with one of four Covenants—mysterious sects, each with their own ambition for the Shadowlands—to restore balance to the hereafter.

You’ll gain access to your Covenant’s Sanctum, where you’ll accept unique quests, undertake a sprawling covenant campaign, and call upon your allies to embark on important missions. You‘ll also earn unique abilities based on your Covenant and class, acquire a unique mount and visual appearance, and forge bonds with powerful souls, drawing on their essence to further customize your skills.

“Steadfast guardians who carry the souls of the dead.“

Living beings have wished to become something greater than themselves since time immemorial. Souls deemed noble enough can prove themselves in Bastion, land of pristine spires and crystalline skies, where those who surpass their trials earn the honor of ascension to a higher calling beside the Archon, first among the winged kyrians.

“Defenders of nature who uphold the cycle of rebirth.“

If the Emerald Dream mirrors the spring and summer of life, then the star-hued plane of Ardenweald reflects life in its twilight.

Those who pass on with a deep connection to nature are tended here by the mystic night fae, who retrieve anima from mortal souls and infuse it into slumbering spirits, rejuvenating their lives with the remnants of the old.

“Necrotic soldiers who wage war throughout the cosmos.”

In the skull-and-bone laboratories of Maldraxxus, strength is rewarded, and weakness cast aside. Necromancers experiment on the souls of the ambitious and contentious, reforming only the greatest into undead soldiers who protect the Shadowlands. Those who are determined rise to positions of power. The less-promising become fuel for Maldraxxus’ malign weapons.

“Eaters of sin who harvest anima from wicked souls.“

The venthyr have a good thing going. They lord over Revendreth’s castles and ceaseless twilight while arrogant souls are delivered to their tables. The harvesters’ otherworldly punishments strip the pride from their thralls, sparing them an even worse fate: eternal torment in the Maw.

Revendreth must always have a master, and rumor suggests that Denathrius, foremost among the venthyr, may no longer be fit for the role. Crowning a new Sire could return the plane to its former glory… or leave Revendreth mired in the same decadence and sin it is charged with cleansing.

Torghast, Tower of the Damned.

Once, the Jailer kept only the most dangerous souls in the cosmos confined in this eternal prison. Now, some of Azeroth’s greatest heroes are trapped here, and you’ll need to rescue them from the Jailer’s tower before he expends their very souls.

Torghast is an endlessly replayable, ever-changing dungeon that you can challenge alone or in a group. Your runs will differ each time, but you’ll need to explore cautiously. Death comes at a terrible cost. Defeat enough of Torghast’s unpredictable challenges, and you’ll be rewarded with unique abilities and items to ensure your present survival or bolster your next run. The further you progress, the greater your likelihood of retrieving materials to craft the legendary weapons and armor that will help you restore balance to the Shadowlands.

Other secrets lie within the tower… but they’re yet to be revealed.

World of Warcraft: Shadowlands will smooth out the leveling experience and better prepare new adventurers for what’s to come. Players will level up to 50 before heading to the Shadowlands (new level cap: 60).

We’ve adjusted the experience curve to make it faster than ever to prepare for the newest challenges, and each level along the way will provide more meaningful increases in progress and power. All expansion zones are getting more flexible, too; they’ll be able* to scale to you and your friends while you level to 50, so it’s easy to try a zone you’ve never played.

*You can still outlevel dungeons and crush them for transmogs or fulfillment.

PRE-PURCHASE NOW & GET THE REWARDS

In Base Edition you will get all the features in the Shadowlands expansion.

You will get 30 Day Game Time Subscription.